You can probably see from the temps what made yesterday a long day. We watched the temperature in the water tank area creep up slowly by small 0.2 increments. It was 2 o’clock in the afternoon before it got to 32 degrees. And the area where we believed the frozen section to be was underneath that between the water pump and the fresh water tank. We figured there was probably a ten degree difference at least. Since the outside temperature was still only 16 degrees at that point, it was a fight to get every little increase on the thermometer.

Luckily, we had enough water here for the essentials. I had bought a big container of water to use for the cats’ drinking water so we still had some of that. And Harry went out to the water connection and brought in a bucket of water to use in the bathroom for flushing the toilet. Our biggest worry was whether the ice would thaw and leave a working system, or whether something had burst down there.

By late afternoon, we could see that we weren’t going to have water anytime soon. So I called my sister to see whether we could borrow her showers for a bit. She said, come on over, so we threw all our bath supplies in a bag and headed over to their house. Wow, did those showers ever feel good! We hung out there for an hour or so, chatting, and then headed back home, rejuvenated! By the end of the day the temperatures were starting to come up a little – we actually got to our high at the end of the day.

I got up in the middle of the night, around 2 am, and checked the outside temp – we were up to 24 degrees, and I decided to try the pump again. We had a little water! We were excited that things seemed to be thawing, and went back to sleep a little more relieved. This morning when we got up – checked again – and we have WATER!!! Nothing ever sounded so wonderful as that water pump did this morning.

We just finished watching the weather, and the temps look pretty good for the next ten days. We are SO hoping that the weather holds until we get the heck outta here!!

Posted by Jessica Riker at 5:44 AM 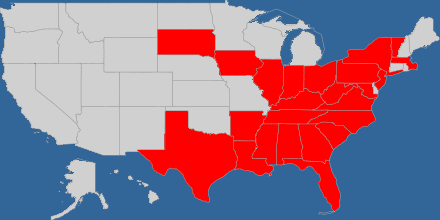