When we arrived here this past Monday and went to level the rig, we once again encountered the same issue with our hydraulics. Both of our slides had the same pause in them, which happened three or four times on each side as we brought them out. And our level up system kept shutting itself off during the cycle. We ended up having to level “manually” which resulted in us only being able to level front to back and not side to side.

After we got all set up, we talked it over. We’ve both been assuming that it’s been caused by the cold weather and maybe complicated by the additive we put in last August. But in thinking about it, we were remembering that there were many times when we leveled and brought the slides in and out in cold temperatures without any issues.

So Harry went on the Heartland forum and started doing some research. He ended up finding a thread that detailed the exact same problem. And from the people chiming in, it sounds like it’s a pretty common issue – a weak breaker. 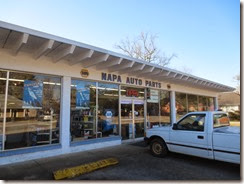 Today was fix day. On our way through Robertsdale yesterday, we stopped at a NAPA store and picked up a new 12v, 50 amp breaker to replace the faulty one. 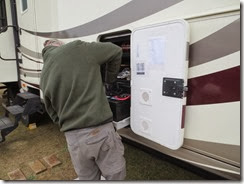 This morning, Harry shut off the power and disconnected the batteries. 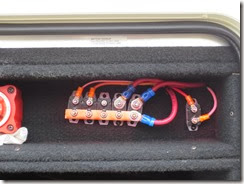 He had already put a picture of the breakers up on the forum and through discussion with other owners, identified the correct breaker as the second from the right. 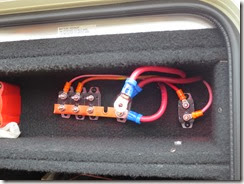 He loosened the screws and pulled out the old breaker, 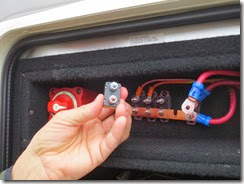 and replaced it with the new one. 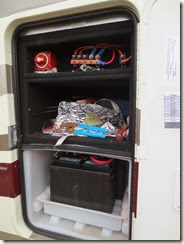 Then we put the batteries back in, and I supported the tray while Harry hooked them back up.

The whole process took about 30 minutes.

Then we pulled the slides in – no pauses!! And started up the auto level system. It worked perfectly!! Yay!!

We are very happy to have this issue fixed.

Posted by Jessica Riker at 3:36 PM