What a wonderful change in the weather! Both Harry and I have been looking forward to lower humidity and temperatures, and yesterday delivered. So nice! With the nicer weather, Harry decided it was time to tackle a project he has been planning for awhile. Since I am not really into the technical stuff, I invited Harry to tell you all about it, so without further ado, I will pass the keyboard over to him…

With my surgery and recovery period now behind me, I really wanted to start working on my list of projects before we move on from Catskill NY. There is a modification I have been wanting to do for a while now - the installation of 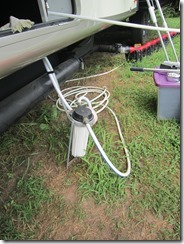 a whole house water filter behind the basement access wall. The temperatures broke here yesterday so it was time to get ‘er done.

As with most Rvers we have had an outside water filter we utilized to ensure better water quality at the various campgrounds we go to.  I wanted to remove one more item from our setup/breakdown process. 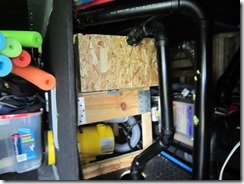 I opened the basement wall and found the perfect location - away from any electrical device in case of a leak someday. You will notice that small piece of plywood next to the drain pipes. That’s where I located the filter. First I installed the piece of 2”x6” to mount the filter. But doing so I found that the frame under that plywood box was never secured to the box by the factory. So I bought a couple of angle brackets and firmed it up so it wouldn’t move around with the filter attached while the RV is in motion. With that done I could now start to install it. 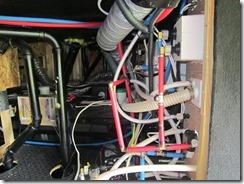 As you can see it was a real mess of pipes and wires down there. I had to figure out how to insert the filter into the plumber system and have it filter water from the city system and from our onboard pump and holding tank. At the same time I still needed to maintain the function of being able to bypass the water heater if the RV ever needed to be winterized again. (I sure hope we will not need to do that again, but maybe the next owners will…). Finding the correct solution meant I had to reroute the hot water heater bypass system (that blue pipe coming up from the floor just below the the red pipes). Thankfully the factory uses red for hot water and blue for cold water. That sure made it easier to figure the filter install into the existing plumbing. 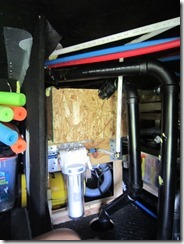 I mounted the filter to the 2”x6” I installed. In the pix below you can see that there is one small way to get further back into the basement area to the right of these drain pipes. So that meant I had to run all my new piping to the filter overhead to maintain the access space.

I started by dry fitting all the piping to the filter and the existing piping system to have the shortest time period of water outage in the trailer. Those white pipes are the new ones I installed for the filter system. The Home Depot here doesn’t carry short sections of blue and red pex pipe so I had to use white.The one on 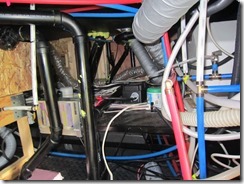 the right is the inlet and the one on the left is the outlet from and to the existing system. I had to keep in mind that I needed to hold the filter 1.5” off the floor so the clear canister can be removed to change the filter. So actually kept a 2” space so I can slide a 2” piece of solid foam under the filter for additional support while we are moving. 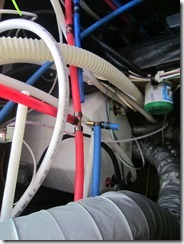 Here you can see where I have cut out existing piping to tap into the plumbing system. Another benefit of doing this mod is I have now replaced all but one plastic plumbing fittings with brass ones. No more chance of one breaking some day. 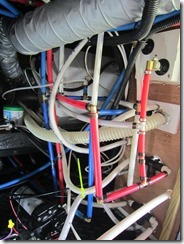 Being a plumbers kid I don’t have too much problem doing plumbing projects. Thanks to my dad I did 99% of all plumbing repairs at our home and can fix most plumbing issues with the trailer. But I don’t do it often so I’m not fast at it. About five hours and one trip to home depot later I got it finished. 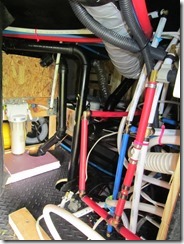 The pix to the left and below shows the finished product. Its hard to see the connections. Most of it is white with a little blue at the starting point just so anyone later can tell that these 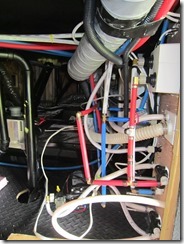 pipes are cold water not hot.

After everything was reconnected, I first tested the new filter system by utilizing our onboard water pump so I could see the water entering the filter. Success! Water entered the filter properly and we had both hot and cold running water. And best of all “NO LEAKS”. Yay!! I love no leaks.

Next I tested the city water system. Pump off…reconnect…turn on water. Everything worked. Double yay!!

The project took a while but I am happy its done and I’m very satisfied with the end result and how it turned out.