A Bike Ride And A New Lock 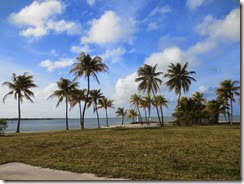 Yesterday was another great day in the Keys. We went out on the bike path twice. Our first outing was n the morning when we got out there for our morning run of four miles. I was pretty happy with how I did, especially given the humidity level of 94%. Our half marathon is now two weeks away! I may end up having to do some run/walk during the half but overall I’m feeling pretty positive. 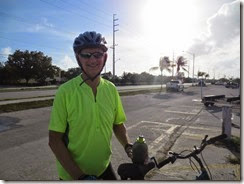 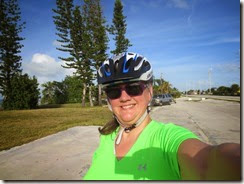 Later in the afternoon we ventured out again to give our bikes a spin for the first time since last August when we were up in the Adirondacks. 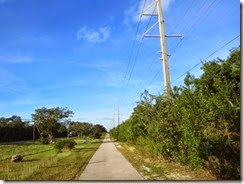 The really nice thing about riding or doing anything else here is that there aren’t any elevation changes. I’ve never been in a place that is this flat before. It’s great.

In between our two outings, Harry worked on a mod that he has been talking about for a while now. We had a Southco lock on our rv that was a hard wired remote lock. We each had a fob to lock/unlock the door, but it didn’t always work. Humidity and/or rain would cause the contacts on the door jam to corrode and then our remotes wouldn’t work until Harry cleaned off the contacts with an emory cloth. We still had keys so we could still lock and unlock our door but it was a little frustrating at times when we would be leaving and push the remote to have nothing happen. Then we’d have to dig the keys out. Not a huge problem but just a little constant irritation. So for a while, Harry has been thinking about upgrading our lock and at the end of December we finally broke down and ordered it…an RVLock with an integrated keypad and remote.

Remove the actuator, which is the mechanism that locked and unlocked the door remotely.

Getting the new one screwed into place…

This one only came with one remote fob, and I didn’t want to spend the additional $40 to get a second one. However, with this lock, we don’t really need two remotes because we can also lock and unlock the door with our code. So far, we’re really happy with our purchase and glad we made the decision to go ahead and upgrade our lock.

Posted by Jessica Riker at 7:30 AM