Won’t Be Long Until the Wheels Are Rolling

It’s been a fast couple of weeks since my last blog post. Since then we’ve been just livin’ the life and enjoying ourselves. We have also had the opportunity to have a couple fun visits with family.

My mother and stepfather came down to Florida for a few days to visit friends. So Harry and I took a drive over for a quick visit. It was a nice easy drive down to the Punta Gorda area. We really liked the area. Harry and I are talking about planning a longer visit there in a year or two so we can look around at prospective “home base” spots for the future.

We also had the opportunity to set up a get together with my aunt, uncle and cousin. They moved down to Florida from the small upstate NY town where I grew up several years ago, but it has been even more years than that since I last saw them. 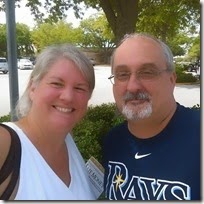 My cousin Howard and I are only six months apart in age and practically grew up together, being in the same class in a small town school. So it was great to have a chance to catch up and we are looking forward to getting together again next winter.

We’ve also spent some time hanging out with our neighbors Dee and Jim. We’ve had perfect weather for relaxing outside and watching our newly installed basement tv.

And our running is going great also! We have run 91 miles so far this month and still have a few more runs to go in the next few days so we will easily make it to a hundred mile month.

So it’s been a really fun two months here in Avon Park. We are almost finished with our time here, but we are happy with our decision to return here next winter after Amazon for a longer stay. Our plan is to do Florida again next winter before we head west for the winter after that. (We originally planned to do Florida every other year but a planned family cruise for next April caused us to modify our schedule a bit.)

We’ll be starting to get things packed up around here over the next few days. Next Wednesday is moving day. We will be going up to Jacksonville for a week’s stay before we start heading north again.

A Great Race and Heading Back to Amazon

(Thanks to Dee (Tumbleweed) for taking all of the photos in today’s blog.) 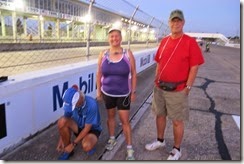 A few weeks ago, our next door neighbor Dee sent us a flyer about a 3.74 mile race around the Sebring International Raceway. It sounded like a great race to add to our list for the year, so we signed up, along with Dee’s husband Jim. Dee came along to be our official cheerleader and photographer. 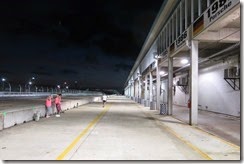 It was nice to be relatively close to the race location, so we were able to leave a little after 6. Much better than the 4:45 am start to travel to the Key West half a couple months ago. When we arrived at the track it was still dark, and we were able to watch the sunrise. 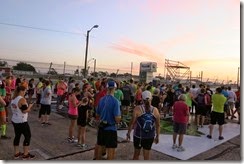 Here are the three of us waiting for the start of the race!

Being a “shorter” race, I felt like I could push myself beyond the pace I usually go for in a running event. I felt good as I kept my eye on my watch to see that I was maintaining a high ten and low eleven minute mile. 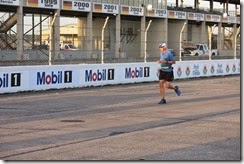 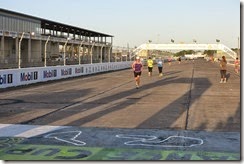 Like I said, I felt really good about my pace throughout the race. Even so, it was a complete shock to me to look at the list of finalists to see that I had finished 3rd in my age group! Also, Harry just missed placing in his age group with a 4th place finish! Jim also had a great day as he beat his personal goal. Now we all have numbers to beat next year.

Amazon update: This morning we received our emails with our offer of employment for the 2015 peak season. They have changed the process a bit this year as they are not interviewing returners. So that made the hiring process a bit easier. We are now signed up for our third peak season. We expect to start the first week of September this year. But I hope it doesn’t come too fast!

We’ve been here now at Adelaide Shores for almost five weeks and are enjoying ourselves immensely. I keep thinking that I need to do a blog entry and then the day goes along and bam! it’s gone.

Most of our days are jam packed but with normal kinds of activities.

Yesterday we had our last tennis lesson, as the resident who has been doing the instruction will be leaving to start heading north. (Not too far north yet, just to northern FL and then southern GA for the next few weeks)

After we got done at Amazon in December, we really tried to cut back on going out to eat all the time. We figured it was better for both our budget and our waistlines!

On a good month, we will eat out about a half a dozen times. Both in January and February, we were able to stick to this goal. I think this month might be a little more challenging – it’s only the end of the first week and we’ve already almost reached that number.

Last Monday we went for a ride with Jim and Dee to one of their favorite places…Parksdale Farm Market.  Yum. Strawberry shortcake. 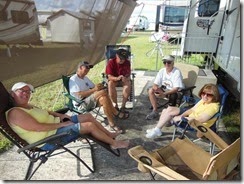 Also on Monday Mike and Terri arrived for a short visit on their way to their next gig. And of course that was a good excuse to do a lot of chatting and a lot of eating!

Tuesday at a local eatery…Hotel Jacaranda in Avon Park.

and Wednesday night at another spot for some Mexican..Don Jose in Sebring. 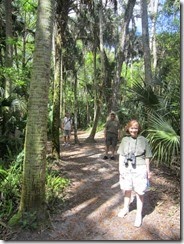 Also, on Wednesday Mike, Terri, Harry and I went over to the state park again to check out the trails. And of course hopefully see some more gators.

We had some great luck! 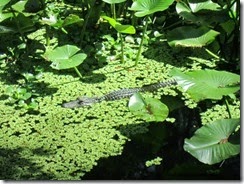 Saw a baby on our first trail…

and a much larger alligator on our second… 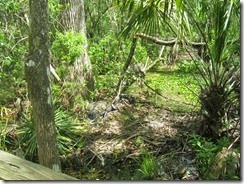 In between all of those fun outings, we’ve also been keeping up our running! We finished February with a nice total of 92 miles, and so far this month we’re off to a good start with five days of running for a total of 21 miles.

Harry has also been continuing his work on a few projects around here that have been on his to do list for a while. This week’s was a reworking of the plumbing connections in the docking center.

He now has it set up so one hose can be utilized to make all water connections in the docking center. He installed the valves so he can easily turn the water off to the trailer and also turn the water on and off to the black flush system.

And, last but not least, we are officially Florida residents. Just a couple days after my last blog post, we got a phone call from DMV letting us know that our truck title had come in. So we went right over and quickly took care of our last registration. All done!

It’s been a great winter so far and we still have about a month left in Florida before we start our trek north for the summer.