Recuperating and Another Milestone Reached

This has been a really quiet week. Harry and I are both pretty lucky in that we very rarely get sick even with a cold. But the bug going around this park was a tough one and laid us both low for more than a week. Although we both have felt much better this week, we still had some congestion and a lingering cough, so we have stayed pretty close to home, other than going for our daily walk. We haven’t even been running! Today we are both feeling pretty much back to normal, so we are going to start back up with a short run tomorrow.

The one exciting event of this past week was when I hit another milestone on my weightloss journey – 60 pounds lost since October 2012. 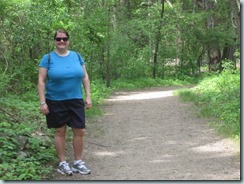 That is my official count, although I am really heading toward 80 pounds lost since my heaviest weight. This picture was taken in May 2010. Anyone who has been reading my blog since 2010 may recall that I had appendicitis in September of that year. Although not a weightloss program that I would recommend, I did lose about 15 pounds while I was sick and managed to keep them off!

I’ve had my ups and downs over the past three and a half years, but overall, counting calories using an app on my phone has proven to be a successful way for me to lose weight. The periods of time when I’ve gotten off track and stopped losing have also been the times when I stopped counting calories. I have discovered that what really works for me is to continue eating the kinds of foods I enjoy, but measuring out portions and staying within a certain calorie range. Getting a Fitbit Charge this past September has also helped a lot. Being able to see how many calories I am burning on a daily basis has helped me to make sense of the calories I am taking in and relate the two numbers in a more concrete way. I looked back at my history on the Fitbit as I was writing this blog. For the most part I tend to burn 1800 – 2300 calories per day. Looking back at my calorie logs, I have been pretty successful at keeping my food intake usually between 1200 – 1400 calories per day. Now that I have a better idea of how many calories I am burning on a given day, I know that if I am going to have a bigger meal or eat some dessert, I need to plan in another walk or some other way of burning more calories that day.

Of course, Amazon was a great kickstarter this past fall to get my weight loss going again. I was burning so many calories walking all those miles each day that I could eat a much more relaxed diet each day and I was still way under in calories all the time. I was really consistently losing a pound and a half to two pounds a week. I was concerned when I left Amazon in December that I might start gaining but that has not happened. I’ve lost almost 7 pounds since we finished the season, so the weight is going at a much slower rate, but I’m still losing!

The picture to the left was taken on November 16th.

This one on the right was taken just this week.  Similar outfit, but the jean shorts are two sizes smaller.

It remains to be seen whether I really have gotten a system going that I can maintain over the long term, but I am feeling good and definitely more confident than I have every been. One of these days I might actually donate those bags of old clothes that I have been holding onto - just in case!

A Week in the Sickhouse

Harry and I hardly ever get sick, but recently we both came into contact with one nasty bug. Or rather, Harry did and kindly shared with me.

Luckily it didn’t involve the stomach at all, just lots of coughing, sneezing and other various cold-like symptoms. Harry came down with it last Friday and by Monday I was feeling its effects as well.

Monday also happened to be Harry’s birthday. We had planned to go out but obviously that was not in the cards. I asked Harry for a special request for dinner instead, and he asked for mac ‘n’ cheese. 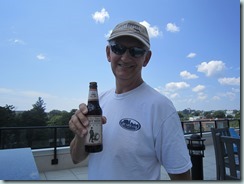 Good thing it was an easy meal to make as I was starting to get chills even as I stood next to the heat of the stove.

Happy birthday to my special guy!!

All bundled up with three layers of clothes and a cat leg warmer! (very unusual for me as I am usually plenty warm without any help)

And that has been our week. Rinse and repeat. We have been parked in our chairs all week and today has been the first day that we are finally starting to feel better. I am looking forward to actually getting outside tomorrow and going for a nice walk! 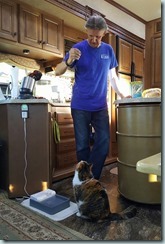 Wow, where did January go? Even though it was a bit rainy for Florida, we still managed to get some fun times in.

Last week I was going to do my “Part 2” on our visit to Paynes Creek State Park. But since it’s been so long since my first post, I’m just going to go on and include it in this one about the past couple weeks.

Back in the mid1800s, there was a trading post established in central Florida, which was attacked by Seminole Indians.

In response, the United States established a series of forts, including the one at this location next to Paynes Creek. The soldiers here never actually saw any battles, unless you include the ones they had with other local inhabitants, namely…the mosquitoes. The mosquitoes prevailed as the fort was only manned for about a year before it was abandoned due to illness.

None of the fort remains, but this is the location where it stood.

We enjoyed a nice walk around the trails, although a couple of them were closed due to flooding. We also weren’t able to make it to the location of the trading post because that particular trail, although not closed, was still very wet and we hadn’t worn our hiking boots.

The Peace River also meets Payne Creek at this location. (By the way, it did not take us 40 minutes to walk this one mile, even at our “leisurely” pace.)

We didn’t try to have a seat in the riverside bench. 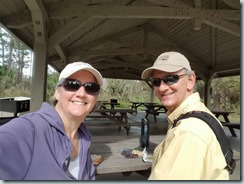 After checking out the trails, we enjoyed a nice lunch.

We may go back another day to check out some of the trails we missed.

And what else have we been up to?

One day we took a drive over to Slim’s BBQ in Arcadia to meet up with a group of Heartland owners. It’s a small world…we first met two out of the three couples in this picture when we were spending some time in Port Aransas, TX two years ago. We had a great time chatting the afternoon away. 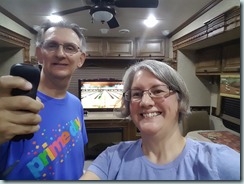 I mentioned the rainy days…luckily we kept our Wii system although we haven’t really used it that much. A couple weeks ago we got it out and set it up, and I’ve been using it to get some exercise on the rainy days…including this evening of Wii bowling. 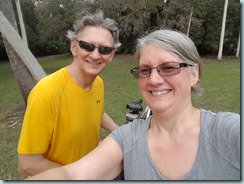 And this week when we finally did get some nice days, we took a ride over to Highlands Hammock State Park for a nice bike ride.

It was a beautiful day and we enjoyed the three mile loop, which has a really nice bike lane. We actually went around several times to make it a ten mile ride. 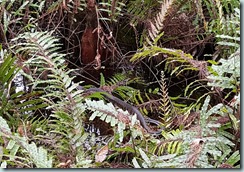 We walked a couple of the trails hoping to get a view of some alligators, but none were to be seen, just this good sized snake, which we think is a water moccasin. Luckily we were on a boardwalk, and this guy was below us in the water.

Our first month here has been a great one, and we are looking forward to February being more of the same. And I’ll try to check in more often!