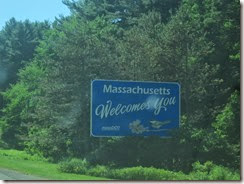 It’s been such a quick month so far that I can’t even believe it. We had a few quick trips planned throughout the summer, and the most recent one was this past weekend, when we traveled to Plymouth, MA for a Heartland rally.

It was a nice weekend, but went too fast, as they always do. We spent some time chatting, enjoyed some good food and relaxed. We felt like we were on vacation. 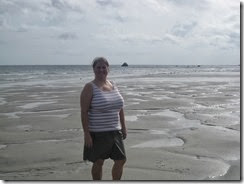 The last time we were in Plymouth was four years ago in September 2010. It was about two weeks after I had emergency surgery for a ruptured appendix. 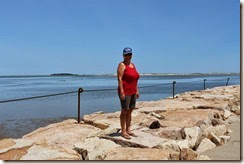 I was definitely feeling MUCH better this past weekend!! 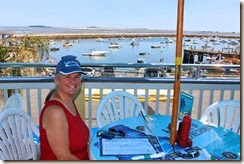 We had lunch at a restaurant in Plymouth with an awesome view of the water. 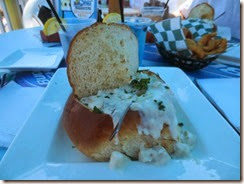 We both had a bread bowl of clam chowder and it was so yummy.

It was such a nice weekend and of course, went by much too quickly.

We came back to Catskill today, where we will be hanging out for two more weeks. It’s going to be a jam-packed couple of weeks, with another visit from our little guy, my mom and step-father at my sister’s for the weekend, friends from Jersey arriving next week for a few days, and then heading north to the Adirondacks two weeks from today! Phew!

We are still waiting to hear from Amazon. According to what we’ve read on the camperforce page, we should be finding out at least five weeks before our scheduled start date. Based on that info, we are assuming that we will be starting sometime in September, and not August as we had originally thought we might. Less money, but more vacation time. Gotta look on the bright side!

Yes, yes, I’m still here!! I was just sitting outside, enjoying our wonderful weather and thinking, I really should check in and let everyone know we’re still alive and kickin’ here in Catskill, NY!

We’ve been having a really nice, laid-back, relaxing summer so far. The weather has been absolutely gorgeous. We had maybe three or four hot humid days, but other than that, it’s just been perfect summer weather.

Harry and I have been doing a lot of outside living this summer, hanging out under our awning and doing some reading. I also have gotten into my sudoku puzzle book and have been enjoying that.

We are still doing great with our running. The picture to the left was taken on one of those humid mornings at the

Harry and I are enjoying our running so much that we did something that’s maybe a little crazy!! We are going to be in Marathon FL for the month of January. About a week ago, my sister was looking at races and found a 5k/half marathon in Key West that month. We went online to sign up for the 5k (that’s about 3 miles) and after looking at the route for the 5k vs. the half marathon (which goes completely by the water), we said “what the heck, let’s go for it” and signed up for the half marathon in Key West on January 19th!! That’s…oh about 3 weeks after we will be getting done at Amazon.

Yes we are nuts!! But we are also very excited. That’s going to be an awesome place for a race!

Speaking of Amazon, we have not yet heard when we will be starting there this fall. We got a newsletter last week that said we should be finding out within the next few weeks. We are looking forward to getting our date so we can have a better idea what our August will look like.

Our time in Catskill is starting to wind down toward it’s end, which is really hard to believe. We are going to Cape Cod for a Heartland rally the weekend after next, which should be a lot of fun. And then in early August, we will be heading north to the Adirondacks for a couple of weeks.

We are having a great time during this whirlwind summer!!