(This post has been delayed due to the fact that we were traveling last week. Since my last post, we have traveled from Florida up to Ohio, and this week, we have been spending some time with our little guys. It’s been a busy time. I still plan to cover each day of our cruise – mainly so I can look back and remember what a great time we had!)

Day 2 was another day at sea. On our previous cruises I don’t remember doing too much on our sea days besides sitting next to the pool. But not on this one!

We started out bright and early again, heading to the workout room at 6 am for 45 minutes on the elliptical! Exercise accomplished – check!

After a relaxing breakfast and morning, I joined my sister at the spa for a nice pedicure.This was the view from our chairs. 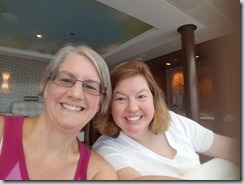 Having a great time at the spa! 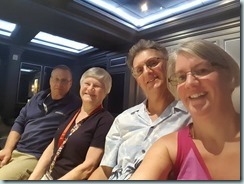 One thing that Disney offers on their cruises are tastings, like margarita tasting, martini tasting, etc. We were going to sign up for the martini tasting but they were booked for the whole week by the time we went! (Sign up early!) So we signed up for one called mixology, along with my mother and stepfather. The person signing us up said that mixology is more hands-on, so I’m not sure if the other tastings follow the same format. We were really glad that we were basically forced to choose this one.

It ended up being a really fun outing. We got to sample five drinks – three full size and two half size. For each drink the bartender would show us how it was made, and then five of us would go up and make five of the drinks, which would then be passed out to all the participants.

Harry got a picture of me in my turn as bartender!

About to sample the last drink – a Jamaican baby Guinness, which was made with rum chata and Irish cream. Yum.

Not too surprisingly, we didn’t do too much for the rest of the afternoon. We went to get a bite to eat and then I took a nap.

The next official event of the day was dinner.

My nephew posing with his yummy dessert.

That night we went out for a drink and to enjoy some shows in the nightclub. Harry and I even danced! (Sorry no pictures.) It was another great day and we enjoyed every minute of it!

Posted by Jessica Riker at 10:40 AM No comments: One of my main goals during this cruise was to have a great time, but to come back NOT having gained any weight. I had come up with a plan to help me achieve that goal, and one of the main parts was to keep up my exercise program while we were on the ship. It helped that my sister was on board, and she also wanted to exercise. Most days we actually got up at 5:30 in the morning(!) including this first day, and after our 4 mile run, I spent a little time out on the balcony just enjoying the view. That’s when I snapped this early morning selfie.

Cabanas up on Deck 11 was one of our favorite places for our meals. They had a wonderful buffet, and every single day we enjoyed the variety of food there as well as the gorgeous view. There was also an outside area

which we were able to eat in a few times.

My mother with her oldest grandson, my nephew Joshua. 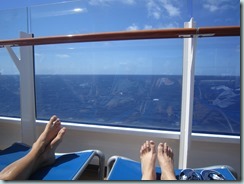 On our last cruise, we spent a lot of time on the deck chairs by the pool, but surprisingly on this cruise, we only ended up doing it once – on this first day at sea.

Disney has a lot of great activities for every age level….games, contests, bingo… I decided to check out something called “Anyone Can Cook” which turned out to be a cooking talk, kind of based on the theme from the movie Ratatouille.

The chef was French, and was the Sous Chef from the dining room Remy. He was very interesting and also inserted some humor into his talk. He discussed how to make lobster ravioli, and we were able to have a sample. I picked up some nice tips about making ravioli, which I would never have even thought about trying to make. There was a food talk for several other days on the cruise, but this was the only time I made it to one. I had hoped to make the one about making apple strudel that I saw later in the week, but we were too busy! 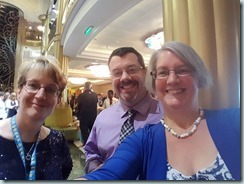 This day at sea was the formal day, so by this time it was time to start getting dressed for dinner. We went down to get a few family shots while we were all in our finery.

My brother Joe and his wife Terri… 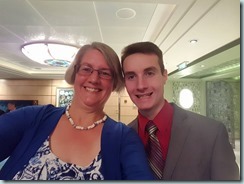 Me with my nephew Joshua…

I got a lot of great food shots throughout the week, but I decided to devote one blog post at the end to the great variety of food that we were able to enjoy!

Another fun thing about Disney is the opportunity to see a lot of their movies. There are several that play in the theater throughout each day, plus you can see older ones using the On Demand

feature on the tvs in the stateroom. On this cruise, they were showing Inside Out, Bridge of Spies, Star Wars, and Zootopia, among others. We decided to go see Zootopia, which was very good. Lots of laughs and a good story line.

By this time it was almost 10 pm and we hadn’t really slept that well the night before. The bed was harder than we are used to, but we had an awesome room hostess who had asked us how we slept that morning. She actually brought an eggcrate topper for the bed and it felt so much better! We were looking forward to a good night’s sleep. 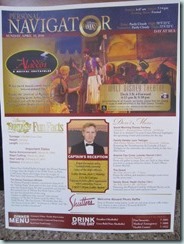 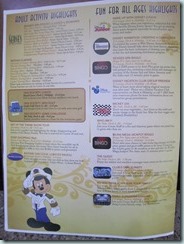 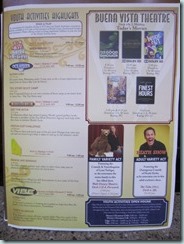 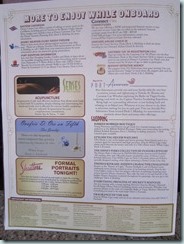 Posted by Jessica Riker at 10:48 AM No comments:

It was a little over a week ago that we set out on our cruise on the Disney Fantasy. As is probably

the case with most cruise lines now, we were able to complete our online registration many weeks before it was actually time for us to depart. As part of the online process, we were able to choose an actual time 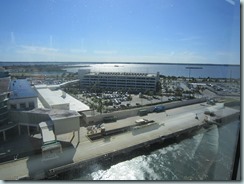 for arriving on the ship, and we signed up for 11:30 to 11:45. We were lucky that, being in Florida already, we had a pretty short trip of only two hours. We arrived at Port Canaveral around 11 am, and it actually worked out perfectly because by the time we parked the truck and made our way in, it was just about 11:30.

The process went really smoothly, and we were walking on board just about noon. We had been told that our rooms would be available at 1:30, and that Cabanas on Deck 11 was open for lunch. There was so much food and everything looked so good! We had heard many good things about Cabanas and our first meal definitely lived up to it.

We spent some time exploring the ship until it was time to go find our room, which was on Deck 9. It was a little after 1:30, and they were opening the room areas just as we arrived on our deck. It was a good sized, comfortable room. My favorite part about our room was the balcony! 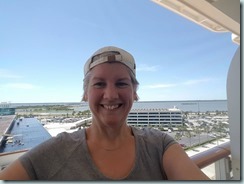 One of my first balcony shots with Port Canaveral in the background. Because my mother and stepfather were in an adjoining room, we were able to have the section between our balconies taken out, and the balcony felt really spacious. Over the next week, we would spend quite a bit of time out on that balcony! 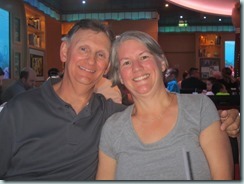 The rest of the day was pretty low-key…exploring the ship and figuring out where many of the main areas were. We had our first dinner in the dining room Animators Palate. Disney has a dining rotation, so we moved between the three dining rooms with the same servers. Our servers were a lot of fun, and after advising us on the first day that their goal was to provide us with a superb dining experience, they would live up to that goal over the coming days. 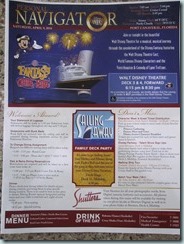 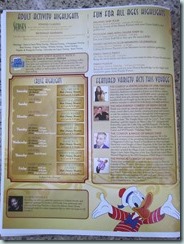 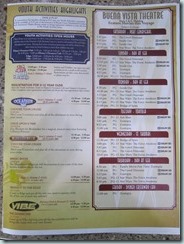 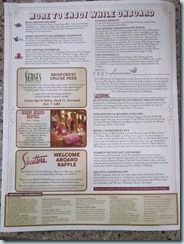 The Wait Is Over!

It’s cruising time! We leave tomorrow a little before 9 for our trip to the cruise port in Port Canaveral. Now that it is here, I am very excited for our trip! It has been almost exactly six years since our last cruise, which was a Carnival cruise. Everything that I have heard about Disney cruise is that it is significantly better, so it will be interesting to see what the difference is.

So to set the mood, I thought I’d share a few photos from that vacation! 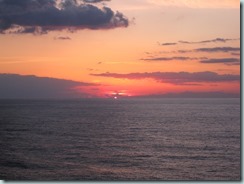 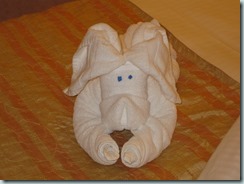 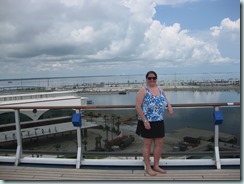 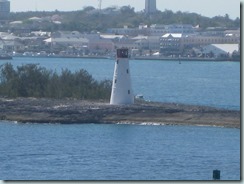 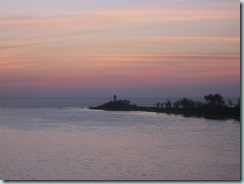 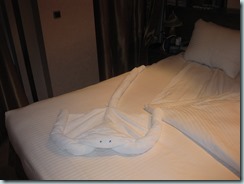 I plan to do a detailed review of each cruise day in the blog after we return, so we’ll see you in a week!

Down to the Last Week

It was over a year ago that we booked a cruise to the Eastern Caribbean which is now only six days away! I am so excited for a couple reasons – not only because we are going on a cruise for the first time in a long time (our last cruise was six years ago), but because all of my immediate family is going on the cruise as well…my sister and her family, my brother and his family, my mom, stepdad and the two of us! Looking forward to making a lot of great memories!

This past week was just a week of odds and ends. Harry finished changing the struts on all of our cabinets. Wow. Such a simple change and yet it makes such a difference. The new struts are very solid. Whether it’s open or closed, we can now rest assured that our cabinets will stay the way we leave them.

retaining bracket for the roof membrane. When we arrived here in January, we were shocked to see that almost the entire piece had come loose. It was just held at each end and Harry realized that the only reason we didn’t lose it completely was that he had caulked both ends a few years ago when it started to pop out there. Well, it’s not going anywhere now because Harry spent one morning this week caulking along the whole piece, on both sides of the rig. Take that trim piece!

Other than that, it’s been a normal week. We’ve finished week 2 of our training program and are enjoying cards a couple times a week as there are still quite a few members of our card group here. Most of them plan to head out mid month, so by the time we get back from our cruise the last of the snowbird holdouts will be getting ready to go.

This week’s project – guess we should pack!?! I’m not sure I remember how!!