After doing Hough and Dix this past Tuesday – two high peaks in one day! – we had another goal in mind, one that I have wanted to do for a few years now – Mount Marcy! Yesterday was the day!

There are a number of hikes in the Adirondack mountains that leave from the Adirondack Loj. We left home around 5:30 am and got to the lodge about an hour later. We were glad that we got there early enough that there was still a parking spot left near the Loj. (A couple years ago we went between 7 and 8 am and had to park about a mile down the road.)

The first two miles of the hike is one I’ve done several times. It goes to what used to be Marcy Dam. From there, there are a number of hiking trails that go in different directions.

While the view is gorgeous, it is very changed, as this used to be an area which was full of water. Hurricane Irene came through here with a lot of fury! My understanding is that Marcy Dam is gone now, and will not be replaced.

This used to be a bridge across Marcy Dam, but it was washed out and is now just a nice spot to stop and get a picture.

Here is another picture which really shows the remnants of the bridge.

We didn’t stay there long, because we still had 5.5 miles to go to the top of the mountain!

Every hike I’ve ever done in the Adirondacks has been the same – with lots of areas with big rocks to walk over and around!

Our next stop and scenic spot was Indian Falls, about a mile and a half further down the trail.

Harry and my mother enjoying the break! 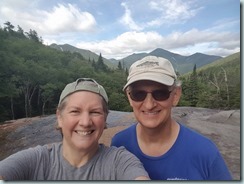 After about a fifteen minute or so break, we were off on our way. We had been on the trail a little over 3 hours at this point and had gone about 4.5 miles. We had 3 miles to go, but the steepest parts of the trail and all of the climbing was still ahead of us!

Posted by Jessica Riker at 12:44 PM No comments:

So I left off yesterday in the middle of our hike. We had started off at 6:30 am, and it took us a little less than four and a half hours to get to the summit of Hough Mountain. I took this photo on Hough – you can see the little round marker on the tree that shows we’re on the summit, and then in the distance behind the pointed peak that was our next destination – Dix!

I was a little worried that we might hit another spot like the one that had almost stopped me already, but once we headed out I was committed. There was only forward from this point on. So whatever we encountered, I would just have to make myself go forward.

This rock face was a little crazy to come across.

This is Harry coming across this rock ledge and NOT looking to see how close he is to the edge as he does it.

I was safely across and away from the edge when I snapped this shot of two members of our party.

Now in this photo you can see where we came from. The peak in the center of the photo is Hough Mountain where we had our lunch. That open rocky area to the left of it is the rock ledge we came across that is in the photo with the two members of our party.

It was a challenge and I didn’t even get some of the photos of the more exposed areas of the ridge, because I was concentrating on NOT thinking about where I was and how open it was and how close to the edge I was, so I didn’t even think about pulling out my phone to take a picture. haha

This is Harry’s “I am very happy that we are at the top” face!!

Was it a challenge – both mentally and physically? Yes!! But when this picture was taken, I felt like I was on top of the world!!! 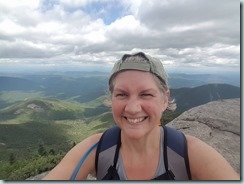 This is the view behind me when I was in that spot in the last picture!

And then it was time to head down! It took us an hour and 45 minutes to make our way from the Hough mountain summit to the top of Dix. We had 6.5 miles to go to get back to our car. It was 2 o’clock when we left the summit for the trek down the mountain.

Harry wanting a taxi for the last four miles!

I don’t have any photos of us at the end, but we all made it down! Those last 3 miles, the ones I had been wondering about in the beginning because they were relatively flat, now became a nice way to end the hike. We walked out to the parking lot where our car was waiting at 5 minutes before 7. So all in all, it took us a little over 12 hours for the entire hike.

It’s been a great month for hikes so far, and we’re not done yet!!

Last week, our hiking friends were discussing what mountains they intended to do next. They asked everyone if people wanted to do a couple peaks in the Dix range – Hough and Dix. People who are working to be a 46’er (one who hikes all of the 46 high peaks in the Adirondacks) sometimes do all five peaks in the Dix range in ONE day. I misspoke in my other blog about it being Harry’s first, forgetting that we did do one high peak last summer.

But we are still relatively low in experience in hiking the high peaks, and doing two in one day sounded a bit daunting. My mother and a couple other hiking friends also doubted whether they were up to two, so in the end we took two cars – one car for the Hough mountain people and one car for those doing both.

The first 2 or 3 miles seemed relatively flat. At any other time, I would have been so happy to encounter an easy slope like this. However, given that we were

going to climb a high peak (4400 ft) and had to ascend 3200 ft, it was a bit daunting as I kept thinking, oh boy, what is this going to be like when we start going up?

And then we started climbing. Elevation is hard to show in pictures, but I think you can see from the angle of this photos and the two members of our party ahead of me where we had to climb on our way up to the top of Hough Mountain.

I felt really good though. And when we got to our last resting stop before the last 0.4 up to the top, I was surprised how good I felt, and Harry and I talked it over and decided that we would press on to do Dix after all.

And then we encountered our first mental challenge. We came out on a beautiful ledge with a gorgeous view…wow. Until we turned around and realized where we had to go. 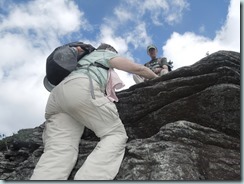 This picture doesn’t do it justice. But the place we were standing was maybe four feet wide. And we had to climb a rocky area and go around an outcropping of rock. Have I mentioned I am afraid of heights? I actually for a minute thought I might not be able to go on. 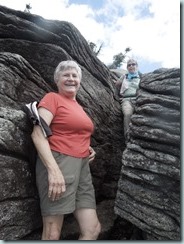 Now I’d love to say I conquered this outcropping, but I was lucky to be able to find another way up. Over on the side there was a crevice between the rocks and after taking my backpack off I was able to climb up between the rocks and get up that way. It was still a challenge but since it wasn’t so close to the edge, I was able to get past the height and get up there. I’m really not sure if I could have gotten up the front way.

After that it was just run of the mill, straightforward climbing – physically challenging, but not as scary mentally. 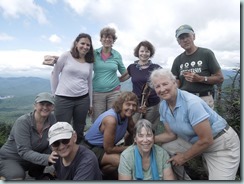 So. Here we were on Hough Mountain. We still planned to go on to conquer Dix Mountain.

And where was that? Well, this picture was taken from Hough Mountain…see that pointed peak over there? Yes that is Dix Mountain. Where we were headed next. And that pointed spine that leads up to it is a ridge called the Beckhorn, which was the way we were going.

As this post is long enough already, I’ll be continuing it tomorrow…

Here we go on our way to the Beckhorn!!!!

Posted by Jessica Riker at 10:15 AM No comments:

So far, this has been the greatest summer for getting in some awesome hikes. I always love hiking while I’m up in the Adirondacks, but being at my lowest weight in my adult life has made them so much more enjoyable, and doable. I may be in my best shape ever right now.

Yesterday we did our most challenging hike ever, but before I get to that one, I have another hike from last weekend to profile – Silver Lake Mountain, our shortest hike of the season at just a little less than 2 miles. We had another hike in mind, but there was a chance of thunderstorms in the afternoon, so we decided to do a short and quick one.

Silver Lake is short but it’s pretty intense. It climbs at a steady and somewhat steep incline the whole time.

I tried to get some shots with people in the distance as it’s the easiest way to show the changing elevation. 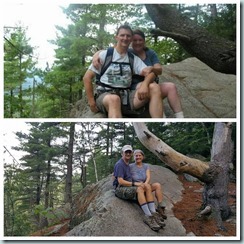 The best part about the hike was being able to recreate a shot from many years ago. Eight years ago, in June 2008, just six months after Harry and I first met, we came up to visit my mother and did our first hike together up Silver Lake Mountain. So we made sure when we got to that spot to get another picture of the two of us on the same rock. We are both in much better shape now!

After a snack at the top, with a great view to enjoy, it was a quick hike down to the car. A little under two hours and a great way to spend a Saturday morning.

Posted by Jessica Riker at 11:35 AM No comments:

I know it’s not convention to tell a lady’s age, but I can’t do justice to the purpose of this hike without revealing that last week my mother celebrated her 70th birthday. She has a group of hiking friends that she hikes with frequently, and last week she chose Hurricane Mountain for her birthday hike. 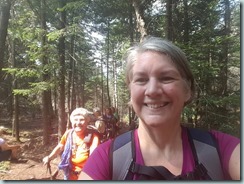 It was a gorgeous day, and in all there were 13 of us that headed out on the 3.4 mile hike to the summit of Hurricane.

We found an interesting place to make a pit stop…

nicely modeled by one of our fellow hikers…

As is the case with the majority of the Adirondack hikes, once you get above the tree line, the views are frequent and wonderful.

Hurricane is one of the easier ones as far as the last little bit. Nice big rocks to climb up like steps.

At the top, everyone pulled out their contribution to the birthday feast…

And we all shared a toast to another year and a great hike to celebrate my mother’s birthday!

Today we have been getting our stuff together for our biggest hike yet. We will be leaving tomorrow at 3:30, YES 3:30 in  the MORNING, for a 12.5 mile hike up one of the high peaks – Hough Mountain. It will be my first high peak in some time, and Harry’s first high peak ever, so we are hoping for a good hiking experience!