Rig Repair Results and Back to Work

Every summer when we have gone back up to NY, we have made it a point to get the yearly maintenance done, as well as any repairs that have cropped up. This past summer on our way back from Florida, we noticed that one of the back landing jacks was wet. So we decided to have the guys at the repair place take a look at it. And in addition to that, one of the back windows came open a bit as we were traveling and when I went in to close it, we discovered that the adhesive in between the panes had given way, and the window was actually coming apart. Big thing #2 on the list!

We had purchased an extended warranty, which was going to be UP on June 21st. Our appointment at Deiderich’s was on June 14th. Talk about just squeaking under the wire! After they evaluated the situation, we found out that both back hydraulic jacks had to be replaced, and the entire window as well. When they called the warranty company, we were told that glass wasn’t covered but the jacks were. Both good and bad news at the same time.

The window and jacks had to be ordered, but since the claim had been placed while we were still in our warranty period, we were fine waiting a bit for the repairs to be done. That was right before the boys were due to arrive, so we decided to wait until the boys went home and then just drive the rig back to Coxsackie from our seasonal site in Peru, about a 2.5 hour trip.

Since that was a bit much to do in one day, we decided that I would stay at my mother’s house with the cats while Harry drove back with the rig. He had an uneventful trip (first time driving the rig by himself) and dropped it off at the repair place right around 9 am. Then he drove over to my sister’s for the rest of the day.

The repairs were completed successfully, and then the next morning he went back over and picked the fiver up for the trip back to Peru.

I got a nice shot of him coming in with the rig, as my mother had driven me over to our site so I could be there for the backing up.

So. The numbers. Our normal maintenance type stuff and the small repairs that we needed done in June, like a replacement of the fan in the fridge – $327.70. The portion of the repair that was covered by the warranty company was $1,809.00. The window replacement that we had to pay for came out to $1651.49. We are so glad that the hydraulic jack replacement happened while we were still under warranty. Phew! 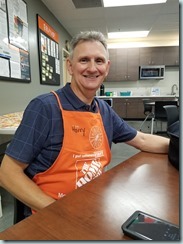 On a happier note, Harry is right now at his third day of work. We had the same shift yesterday so I was able to get this picture of him while we were both on our lunch break. He is really excited to be working at Home Depot. He has seriously been saying for as long as I’ve known him that his long-term goal was to retire from his job for the State of NY and work part-time at Home Depot. It took a few years after his retirement, but he’s finally achieved his goal!

Meanwhile, I am almost at the one year point! I had my interview last year on my birthday, which is coming up this week, so that’s really easy to remember. I have to say, I really love my job. I like what I’m doing and I like the people I work with. I am so lucky.
Posted by Jessica Riker at 2:22 PM