Actually there are two accomplished missions on my mind this morning, and I am excited about both of them! This morning my 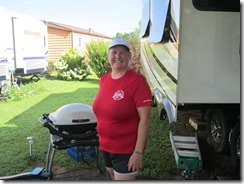 sister and I reached the high point of our training with our final long run – 12 miles! It took us 2 hours 42 minutes to complete the entire run. If someone had told me at the beginning of this summer that this was even possible, I would not have believed it. We still have two weeks left of training until the half marathon, but the training program calls for shorter runs now to give the body a chance to gather strength for the real thing. Next Saturday we will “only” be doing 6 miles. Then comes the next challenge – keeping it up! I am determined NOT to lose all the progress that I have made this summer. 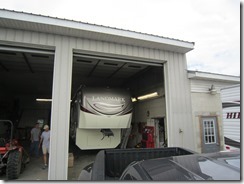 The other big accomplishment that I am happy about this morning is our completed run to Diederich’s to get some maintenance work done on the fiver. I have not been looking forward to it, not because of us so much, but the cats. It ended up working out ok though, primarily because the weather was so nice.

We left a little after 8 am to bring the rig over. We are only about 25 minutes away, so the location is very convenient. We had a pretty long list of stuff that needed to be looked at – many small things and a couple bigger items. 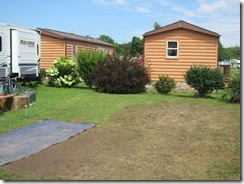 The major project was repacking the bearings and greasing the wet bolts. Also the slide topper that we had replaced in Florida needed to be adjusted. Ever since it was changed, we have had issues bringing in the slide if it had rained. We could tell just by looking at it that it wasn’t tight enough. And of course, they had to look at the a/c that rained on us a few days ago. We had enough to keep them busy for awhile! 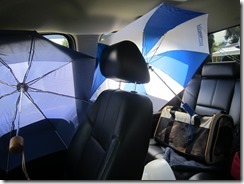 After stopping for a cup of coffee, we came back over to the campground because Harry wanted to mow the area that is usually covered over. It seemed very strange to see “our” spot empty.  I used a couple umbrellas to keep the inside of the truck shady for the cats. And there was a really nice cool breeze blowing, so that was awesome. 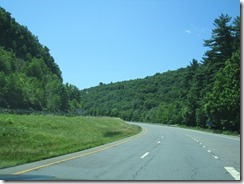 Since we had a lot of time, we skipped the highway all day and took the back roads all over. We got a chance to see some new scenery. 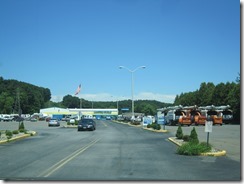 We took advantage of the time to be out and about to make a run to Camping World, of course.

We were able to find a nice shady spot over on the side where we could sit in the shade with the windows open. 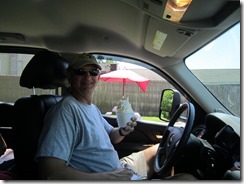 And since it was such a beautiful day, and we had the time, we stopped at the ice cream place down the road for a nice treat. 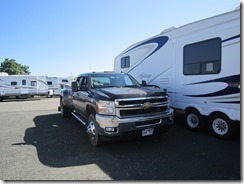 By this time we were hoping that they might be finished, so we headed back over to the service place to check out the progress. Well, unfortunately, they weren’t quite done, so we managed to find another shady spot and settled in to wait. 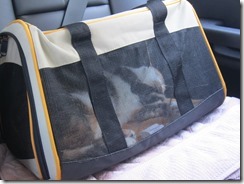 The cats were so awesome. Both of them just relaxed in the back seat and hardly complained at all. The day was so much easier than I expected it to be.

Finally around 5 o’clock they were finished up, and after paying the bill, we hitched up and headed back to the campground. It was a long day, but a good one…and now hopefully we are all set for another year of traveling.