Our first full week back here in upstate NY has been a cool one. The temps over the

past few days have been in line with usual average temperatures in March instead of April. The cooler weather didn’t keep us from sampling our first soft ice cream of the season – with snow flurries coming down! And it was funny to see the number of people that had the same idea – we counted five other cars stopping for ice cream while we were there eating our cones. Many people were wearing their winter coats as they stood in line for a frozen treat.

We were very lucky last Sunday to have one more gasp of warm weather for the day of the Kingston Classic race. It also helped that the race was at 1 pm in the afternoon. Harry and I were signed up for the 10k and my mother did her first 5k.

We started out more bundled up but were able to take off a layer before it was time to start.

Even though Harry and I have been running pretty 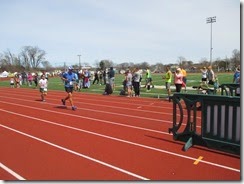 consistently since January, those NY hills were a shock to our system. A 10k is 6.2 miles which is a distance we have run many times, but my muscles were complaining long before the finish line and I ended up having to walk a couple times in the last couple of miles. 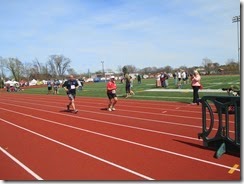 I managed to run it in at the finish though! Do I look as glad to be done as I felt?

Rose and me posing for a selfie…

It’s been a busy first week, and I’m sure the next five here will speed by just as quickly. Hopefully next week’s pictures won’t have any jackets in them!

Posted by Jessica Riker at 8:43 AM