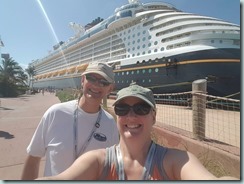 After going back to the ship for breakfast and a nice refreshing shower, we headed back down to walk over to Castaway Cay.

The view was completely clear, as there were very few people actually in the water. Just on the beaches which aren’t really visible in this picture.

This picture taken from the ship gives a better idea of how choppy the water was.

We stopped for a few photo ops.

We didn’t have much planned, other than to get a bite to eat. There are burgers, salads, spicy chicken patties etc all available at no cost just like the foods on the ship. There are also some bars where you can get

some yummy tropical drinks but we didn’t partake as we had other plans later in the afternoon.

As we were eating, I heard some music and saw Goofy dancing along in the street.

After checking out the shops with the usual Disney souvenir items, and resisting the temptation to buy any, we headed back to the ship because we had something fun planned!

We did this last year on our Disney cruise and enjoyed it so much that we scheduled another session this year. Definitely one of my favorite parts of the cruise.

Disney offers tasting sessions – martini, margarita, chocolate and champagne. Last year we tried to schedule one, I don’t remember which one, and it was already full. So the person recommended mixology and I ended up being so glad we got it!

It’s basically like a cocktail tasting session, only the bartender talks about the different kind of cocktails and teaches you how to make several different kinds of drinks.

We got to try a margarita, a mojito, an apple martini, a layered drink with Kahlua, Irish Cream and triple sec called a B-52, and a tequila sunrise. They were soooo good.

It was so much fun and we will definitely be doing it again on our next cruise!

Posted by Jessica Riker at 7:15 PM