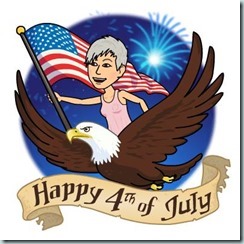 Happy Independence Day! I hope all of my American readers have a safe and enjoyable holiday!

Yesterday dawned as a bright and beautiful day. After all the rainy days over the past month, it was nice to get packed up without the prospect of being rained on any minute.

Although we did have a really nice site, which was a pull through right up by the office, because of the location of the site, to get out we had to drive down the hill to our left (shown in the above pic) and around a big loop which included 3 decent hills. I always find it nerve-wracking to have to go up a hill at 5 mph pulling the fifth wheel.

So I was happy when we were out of the campground and on the road, enjoying the wonderful blue sky.

Thankfully there was nothing really noteworthy about yesterday’s trip.

We traveled about 335 miles in total, going through Pennsylvania for about an hour and then…

We said “so long” to NY as we won’t be back until early June next year!

The cloudy skies appeared to have followed us to Ohio, but it didn’t rain until after we got set up, so we were thankful for that.

We are here for just a few days. On Saturday we will pull out with Schaun for his first road trip in the rv. He has stayed with us for a couple weeks before but that time we went and picked him up. We will be having some good times in the Hershey area. Lots of fun planned!