Let’s See, What Was I Saying?

Well, when I did my blog post yesterday morning, I was sitting in my chair anticipating a nice quiet sunny Sunday spent doing nothing much. That changed just an hour or so later.

On Saturday afternoon, we were surprised when we came back from our run to find that the power was off. Just a couple minutes later it came back on. We checked our Progressive EMS to discover that we were having a high voltage issue. In the next ten minutes the power went off and on two or three more times. Harry called the campground and they said they would send someone over. The guy arrived a few minutes later and checked the power pedestal. He didn’t really seem to know what it might be, other than to say maybe it was a bad outlet. So he changed the outlet for a new one, and when we plugged back in, the power voltage was reading back in the 120s. Harry didn’t understand why an outlet would have caused high voltage but changing it out seemed to have solved the issue.

So you may remember that I mentioned in my blog yesterday that we had a full house of overnighters with our whole row full of rigs. (Several of them had actually come in to the campground while the guy was working on the electric.) When I wrote my blog, there was one  motorhome left parked in the site right next door to us. Just a little while later, they started hooking up and they weren’t even gone yet and our power had once again gone off from high voltage. We were faced with a decision to make at that point. We were planning to stay there until Friday and did not want to have to deal with our power shutting off frequently for that number of days. Plus, we weren’t sure if there was any chance of causing some damage to our system. So we decided our best move was to head on down the road.

Harry called the campground. The owner wasn’t in, but he explained the situation to the person on the phone. They weren’t sure whether we could get a refund, but said they would contact the owner and call us back. I looked online to find another campground, and found one in Orange that was only about 16 miles down the road. While we waited for the call back, we started packing up, because no matter the outcome, we had already decided we were moving on. A little while later, the person called back to let us know that the owner would give us a refund for the rest of the week. Obviously, we were happy to hear that. 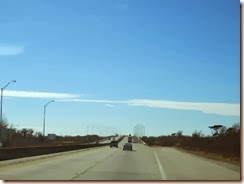 It was around 1:45 when we pulled out at our latest time for our shortest trip. 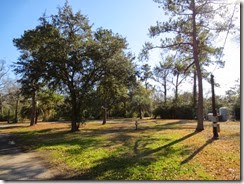 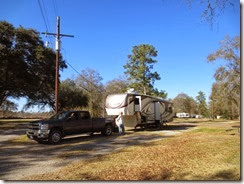 So here we are in Oak Leaf Park Campground, in Orange TX. 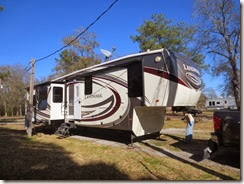 It appears to be an older campground. They don’t have wi-fi or cable. (Not that we need cable as we got great local channels through the antenna and the rest off our satellite.) But most importantly, they have stable electric!! And hey, there’s a Walmart here!

We do plan to be here now until we move on to Galveston on Friday.

Posted by Jessica Riker at 9:25 AM