A big welcome to our newest follower – Happy Trails. Thank you for joining us and coming along for the ride! :) 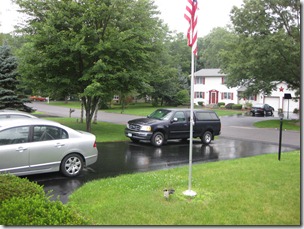 I don’t know how visible it is in this picture I took from my front step, but it is once again RAINING here! So the bike ride plan for today has not materialized. I was even thinking that I would just take a walk instead, but the “perhaps an occasional shower in some parts of the viewing area” mentioned by our esteemed weather man has been a steady rain for the past hour and a half. It doesn’t look like it’s going anywhere, at least anytime in the near future. The rain started – oh just about the time I got out of work!!

Other plans for today have fallen into place nicely. I got home from work around 2:15 or so. We took a ride up to the local transfer station and dropped off the tv I had that didn’t work, and some plastic from a child’s outside playhouse for recycling. Our next door neighbor had given it to us for when Schaun gets older, but we decided that for the amount of time he spends here, which is very little, it didn’t warrant cluttering up our back shed with more stuff!

Other than that, the major accomplishment around here today has been the major construction project going on out in the garage. The new shelf is coming together nicely.

Harry took most of these pictures while I was at work – I only took the last one to show him hard at work on his masterpiece (can you tell it’s posed and he’s not really drilling into that piece of wood?).

The other thing that I finally got accomplished today was posting the chair and hassock on freecycle. I hope I get a taker soon! It will be great to get that out of the garage!

It’s still raining – even harder than before I think. I hope it clears up for tomorrow!!

Posted by Jessica Riker at 4:28 PM